Take action to resist Turkey’s war on Rojava
We are protesting against Turkey’s illegal invasion of the Kurdish region of north-eastern Syria (known as Rojava).
Turkey’s goal is to ethnically cleanse a 30km strip of Rojava, meaning that all major cities in Rojava would be under Turkish control. This week, it was reported that Turkey has allegedly been using white phosphorus against the people of Rojava. Turkish-backed jihadists have been carrying out killing sprees with impunity.


Come and join the Oxford’s “Rise Up For Rojava” protest
Friday 25th October, at 2pm at Carfax Tower, OX1 1ET. 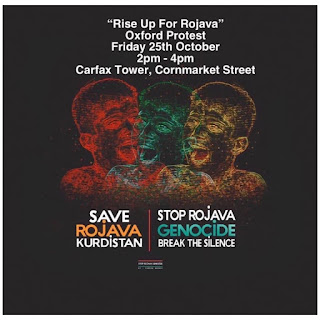