Laughing all the way to the bank... 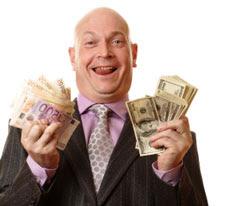 But why can't the bankers' pay for the crisis out of their own pockets? Is it because their own pensions aren't big enough? InFocus uncovered the facts about some of the pension pots that bankers have to struggle by on during their retirement and compares them to the 'gold-plated' pensions of some of our public service workers.

After all: 'We're all in this together' – right?

Fred Goodwin: aged 50 at retirement
Chief executive of the Royal Bank of Scotland.
Worked there from 2001 to 2009.
Annual pension: £342,500.
Poor Mr Goodwin had to reduce his pension following public outcry and negotiations with RBS. However, he was entitled to keep an estimated £2.7m tax-free lump sum as well, which would have helped to soften the blow.

Carole Maleham: aged 59
Driver for museums and arts for Rotherham borough council.Employed by council for 26 years (unable to join the pension scheme for many years as she was a part-time worker).
Expected pension: £3,000 a year.

Now more than ever, it's important to check-in on your mental health.

We are all dealing with a lot of uncertainty.  visit Every Mind Matters for tips and advice to look after your mental wellbeing.  https://ww...